These instances are the result of the following procedure. First there were files with random generated points in the plane on a 10,000,000 by 10,000,000 grid.
These points serve as terminals and were converted to rectalinear graphs with L1 edge weights, by building the Hanan grid (see Han66 ).

Then these graphs were preprocessed with GeoSteiner a Software for computing Full-Steiner-Sets by M. Zachariasen and D.M. Warme . For a description of the Algorithm see War97 and WWZ00 .

The original point sets are from the OR-Library named ES10 to ES10000 corresponding to the number of points given.

Here is an picture of es250fst01 with solution: 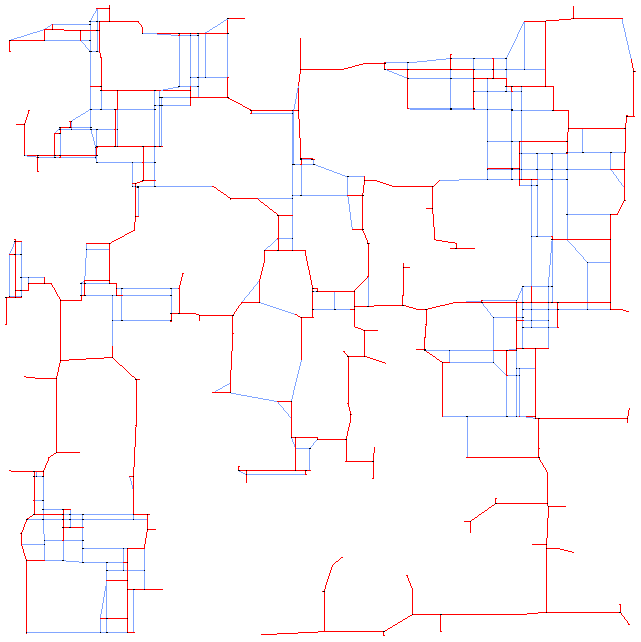 The files can be found in the download section.

The column DC classifies the difficulty of the instance.

L
Solvable by usage of local preprocessing. Typical examples are the SD-Test, BD-n Tests and FST computations. Neither a global upper nor lower bound needs to be computed.
P
Solvable by polynomial time algorithms, like dual ascent in combination with primal heuristic, a integral LP formulation or advanced preprocessing like reduced cost criteria or the RCR-Test.
NP
No polynomial time algorithm is known. Use of an exponential time enumeration sceme like Branch-and-Bound is neccessary.

If the number in the Opt column is written in italics the optimum is not known. The number given is the best know upper bound.